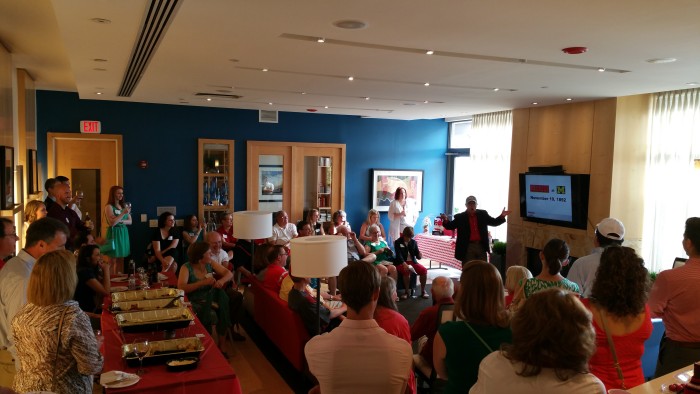 Join OSUDC for our Annual Meeting and Spring Reception! This is our biggest club event of the year and includes heavy hors d’oeuvres, open bar for reception hour, great raffle prizes, auctions for our club football tickets, and special guest speaker, Pulitzer Prize winning Editorial Cartoonist Nick Anderson! Bid on our club ❌ichigan tickets, sign up for tickets to the Maryland game, and help us raise money for our scholarship fund, plus meet our 2016 scholarship recipients and their families.

We’re excited to have our Annual Meeting and Spring Reception at Clyde’s on Leesburg Pike in Tysons this year! Ample parking is available, and the restaurant is just a short walk (0.2mi) from the Greensboro metro (silver line).

Nick Anderson joined The Houston Chronicle as editorial cartoonist in February of 2006. Anderson’s philosophy: “An editorial cartoonist, fundamentally, should be anti-establishment. No matter which party is running the government, it is the essence of satire to question authority.” His loose, idiosyncratic style carries with it an unconventional message that has broad appeal.

In 2005, Anderson was awarded the Pulitzer Prize for Editorial Cartooning. The judges complimented his “unusual graphic style that produced extraordinarily thoughtful and powerful messages.” In fact, Anderson has pioneered a method of coloring his cartoons. Using an advanced computer program, he creates digital paintings characterized by subtle textures and striking images. Because of his innovative use of the program, its manufacturer, Corel Corporation, has designated Anderson a “Painter Master.” Anderson majored in political science at Ohio State University and was editorial cartoonist for the school’s newspaper, The Lantern. Anderson’s cartoons have been published in Newsweek, The New York Times, The Washington Post, USA Today, the Chicago Tribune, and other papers.