REMOTE EVENT: The Black Athlete: Politics and Protest in the Era of Black Lives Matter: A Dialogue 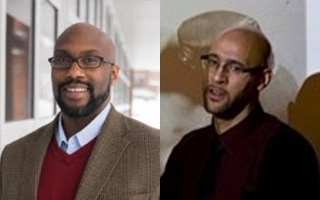 Derrick White earned his Ph.D. in history from The Ohio State University. He uses the lens of black organizational life to examine modern Black history, sports history and intellectual history. His most recent book, Blood, Sweat, and Tears, chronicles the development of black college football in the 20th century and is among the first comprehensive histories of black college athletics. Using the biography of Alonzo “Jake” Gaither and the history of the football program at Florida A&M University (FAMU), he shows how black college football and its supporters created successful programs during segregation by relying on a network of athletic enthusiasts in the media, on campuses and in the community.

Louis Moore earned his PhD in history from the University of California, Davis. He teaches African American history, civil rights, sports history, and U.S. history. His research and writing examines the interconnections between race and sports. He is the author of two recently published books, I Fight for a Living: Boxing and the Battle for Black Manhood, 1880-1915 and We Will Win the Day: The Civil Rights Movement, the Black Athlete and the Quest for Equality. He has also written for a number of online outlets including The Shadow League, Vox and Vocativ, and he has appeared on news outlets including NPR, MSNBC and BBC Sports talking sports and race.

To learn more and register, visit the Center for Historical Research (CHR) website.

If you have questions or require an accommodation such as live captioning or interpretation to participate in this event, please indicate contact CHR Director John Brooke. Requests made 10 days prior to the event will generally allow us to provide seamless access, but the university will make every effort to meet requests made after this date.

About the 1619 and Beyond Program: In late August 1619 “twenty and odd” Angolans were brought from the West Indies to the Chesapeake Bay on the ship White Lion. Some of these individuals were sold into slavery at Jamestown. 2019 marked the quadricentennial of this arrival of Africans in British North America and the start of a trans-Atlantic slave trade that would continue (legally and illegally) until the Civil War, with profound legacies running to the present.

During this, the second year of our lecture series, The Ohio State University will move from last year’s focus on the slavery era to a year-long program examining the legacies of slavery in American and African American life from the post-emancipation period (after the Civil War) to the present time. This year, the series will feature invited lectures by eminent scholars of the Jim Crow Era, the Modern Civil Rights Movement/Era, and the contemporary issues that continue to reflect a need to address the legacies of centuries of legal, race-based enslavement, segregation and discrimination. The program will also offer film screenings, seminars and Slavery Roundtables. The departments urge students to participate in these events and to take courses dedicated to the history of slavery.